Personal Thoughts on the Libyan Revolution 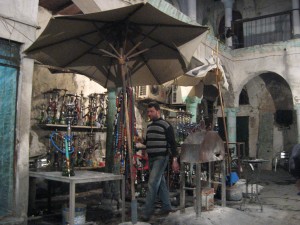 With news stories on the Revolution in Libya coming across the news outlets at an accelerating rate, I have found myself distracted and of the mind to share some thoughts. I cannot, for reasons related to concerns for safety of Libyan friends, make political statements. Rather, I wish to reflect my thoughts based upon personal experience in that Country.
Nearly three years ago, I had the privilege to visit Libya for two weeks at the invitation of a friend, who I will only identify by his first name, that we first met when he came to stay at our home through a home-stay arrangement associated with an international conference hosted on our ASU Campus. Saad was a delightful guest and we enjoyed him thoroughly. With some possible interest in professional collaborations, he arranged for my visit–one can only enter Libya after having such an invitation–that was paid for completely by my hosts.
I was intrigued by the opportunity and found my experience to be highly rewarding. Virtually all that I experienced, while there, was positive and eye-opening. The people I met were virtually all courteous and friendly beyond any sense of official hospitality. Even before I landed in Tripoli, I met a young man who sat next to me in the plane. Not having much to share in terms of conversation, I happened to notice a ring he wore and paid complement. In a unhesitant moment, he removed the ring and presented it as a gift. Although I made repeated effort to share that I had only wanted to complement him on his ring, he would not listen and I have worn that ring everyday since. 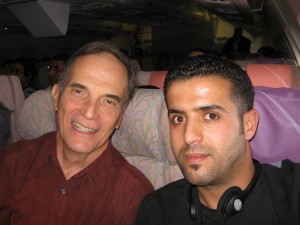 Young man from Libya who sat next to me on the flight to Tripoli and insisted on giving to me the ring he wore. 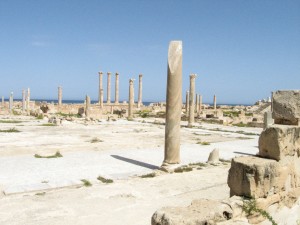 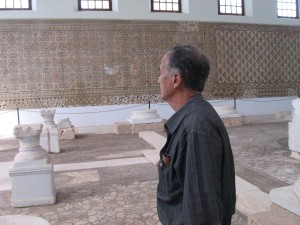 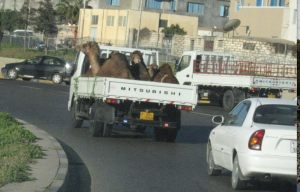 Camels riding in the back of a truck in Tripoli 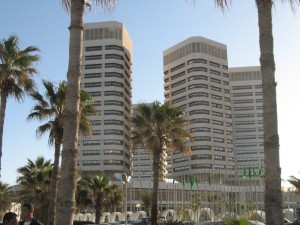 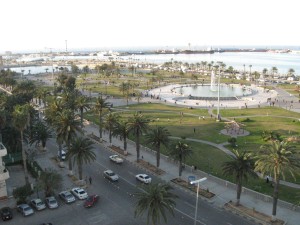 View from my hotel balcony to show Green Square where much of the Revolution has been staged. The Bay, made famous in the Marine Corps hymm ("…to the shores of Tripoli") is in the distance.

After our arrival in Tripoli, I was met by my friend, Saad, and lost contact with that young Libyan man but have never forgotten that memorable occasion on the plane.
There were many such events during my stay in Libya–the numerous opportunities to share thoughts with Saad, meet his colleagues and friends, sit and enjoy Libyan coffee in a 700 year old coffee shop in Old Town Tripoli, watch people walk by while I sat in a smoke shop with Saad and his friends as they smoked from the variety of flavored water pipes.
There were many opportunities to see Tripoli on a daily basis and always present were the large photos of the Libyan leader, Col. Gaddafi with a display of the number of years he had ruled the Country. One morning, on the way to meetings, we came upon a flatbed truck carrying camels much like we would see someones dogs in the back of a pickup going down the road in the US. That same morning we saw office buildings shaped like upside down Jim Beam bottles–a symbolic move on Col Gaddafi’s plan to remove alcoholic beverages from the Country.
Of course the current news from Tripoli, coupled with photos of the people and mass destruction of the City, stand as significant, and saddening, contrasts to what I witnessed. Photos from the New York Times that illustrate the Revolution are telling. One that really caught my attention was of a revolutionary soldier, from behind, with a long string of bullets draped around his neck, as if a necklace, with each pointed, ironically, at his own head but ready to be loaded in his automatic weapon.
However, my experiences outside Tripoli, especially to see Saad’s boyhood home town and the two ancient Roman cities of Sabratha and Leptis Magna are also made fresh in my memory due to the ongoing news stories. The name, “Tripoli” means ‘Three Cities’ and that city sits on top of one ancient Roman City with only one Roman arch evident. The rest of that ancient city remains under the modern city of Tripoli with no effort made to reveal it. The other two cities of the ancient triad remain very evident, however. Sabratha, about 50 miles to the west, and Leptis Magna, somewhat further to the east of Tripoli, are still quite evident and beautiful to see. With Saad, I was able to walk through each of those city ruins and rarely saw other tourists. With that being said, upon our entrance into the open air theater in Sabratha, we came upon a group of British tourists–one of whom had an operatic voice and stood upon the stage to deliver an impromptu performance of a piece from an opera in which she had performed. The phenomenal acoustics of that theater projected her voice with such strength and clarity that I could not have imagined. 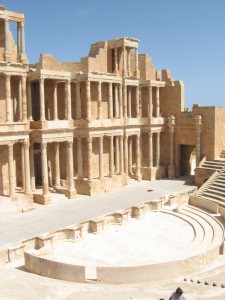 Today, much of the news on the Revolution makes mention of Sabratha, and my hope is these beautiful remnants of a time long ago remain untouched. My sense is, given the very positive experiences I had with Libyan people, that they will take care to avoid damage to these treasured antiquities. May we, likewise, see very progressive movements arise from the structural ruins of this Revolution. 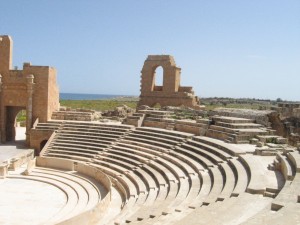 Seating in the Theatre in Sabratha 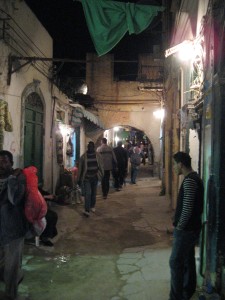 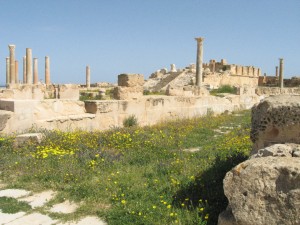 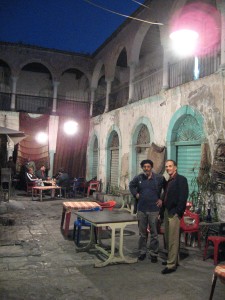 With Saad, in a 700 year old coffer shop in Old Town Tripoli 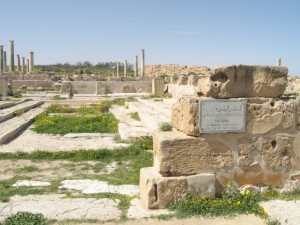 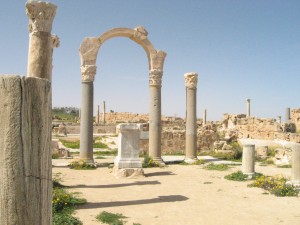 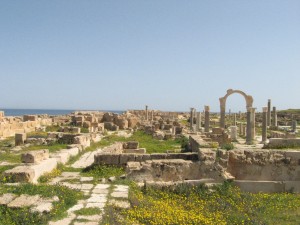 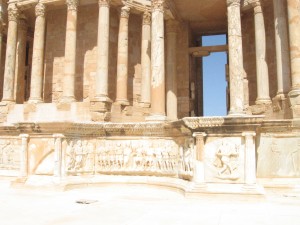 Below the stage of the theatre 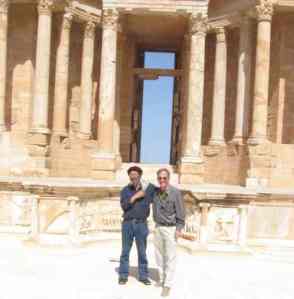 On the theater stage at Sabratha with Saad

This entry was posted in Uncategorized. Bookmark the permalink.